Conference Partners ran the International Conference on Ocean Energy (ICOE) in 2012. ICOE is the largest global ocean energy event focused on the industrial development of wave and tidal energy. Held every two years, the goal of the conference and exhibition is to share recent experiences from international research and demonstration efforts. Conference Partners utilised the location of the venue by placing an element of the exhibition on a ship on the river adjacent to the venue. This was an added value for some exhibitors and helped Conference Partners’ commercial team sell over €350,000 worth of exhibition and sponsorship over a nine month period.

ICOE 2012 saw a 100% attendance increase since its first edition held in 2008. A snapshot of statistics for the event revealed the following: 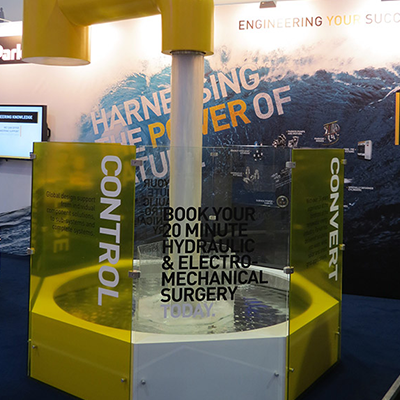 “I must thank our organisers Conference Partners and particularly Sarah who has done a great job in making this run smoothly. She was a tough task master who led this out like a military campaign and the fruits were there to see. It has been a remarkably success.

The organisers faced considerable challenges in bringing the CCD and the river together as one. The concept of ‘ICOE on the River’ was one of the highlights of the event and CP liaised and co-ordinated the boats, and all outside signage (flags, street banners) most effectively. They maximised the use of the Navy Vessel by co-ordinating receptions on the river. This was one of the most popular and remarked aspects of the conference. They also organised the gala dinner in Trinity College, another highlight of the event.

Subsequent contacts with the International Committee, exhibitors and delegates, has confirmed the universal praise for the organisation of the event. I cannot speak more highly of the professionalism of Conference Partners, other than to add that they were good-humoured and pleasant colleagues to work with.”